Thoughts on sincerity in metal

Metal places more emphasis on sincerity - sometimes verging on high-minded seriousness -  than I'm used to the ironic world of indie rock (and writing about same).

You hear this sincerity - a reaching for the grand statement - in the length, ambition and technical precision of metal music. You see this sincerity - a curdled Romanticism - in the over-elaborate band names and record sleeves. You read this sincerity - a naive-in-the-best-sense questioning - in its addressing of political and philosophical themes lyrically.

Metal culture embodies a simultaneous reaching for and rejection of sophistication.

All of this is not to say that metal tropes can't be invoked with irony or knowing by its practitioners: for example Steel Panther [cough], but also in another way thrash bands inheriting punk's half-satirical alienation pose. But the scene does not generate its own sly constant auto-critique in the same way that indie or nostalgia rock does.

The mild hazing which passes for interviews in indie circles promotes a self-defensive and ironic relationship towards music and writing about music.

To illustrate this line of thought, it's worth comparing and contrasting Metal Hammer or Terroriser with The Stool Pigeon or the NME. In metal magazines the artist remains on their pedestal, is subject to reverence, in a way that only the dead or the legendary are in other scenes. It is taken for granted that the band will have something to say - and one of the problems with the writing is that the interviewer rarely drops out of a hagiographical mode.

Over this week, I'll be continuing my writing about metal by enthusing about a few of my favourite acts as well as looking how they relate to this model of sincerity.

All contributions to this chin-stroking free for all most welcome.
Posted by Magpie Moth at 3:27 PM 2 comments:

Recently I wrote about Butcher Babies playing to the boob gallery in Metal Hammer and the rather sad things that says about the magazine, the band and the subculture, in that order of culpability.

Spleen vented, I invited you to provide satirical captions for the BB's poster in Metal Hammer, which looked like this. 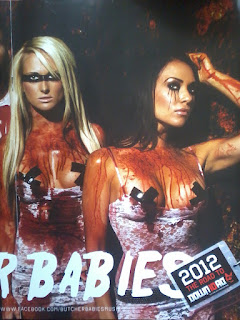 I said I would include the best three entries, but since only four people entered, I decided to be a merciful judge and not consign one entry to the oblivion of obscurity.

So, allow me to present your Butcher Babies poster-remixers with awe and gratitude: John, Rachel, Stef and Tom, thank you very much for brightening our day. And a metal NB: the last one is a Motley Crue reference, apparently. 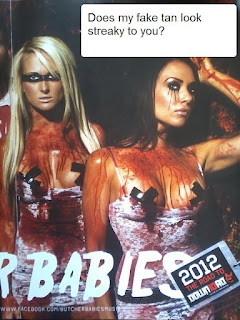 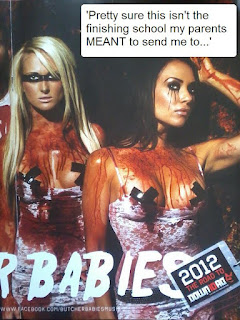 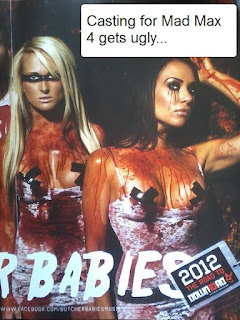 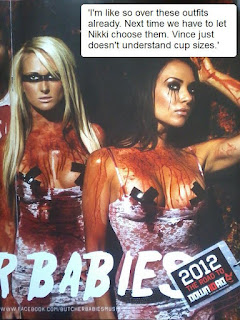 5 Links and a Picture - Sunday 1 July


Fake meat: is science fiction on the verge of becoming fact (Guardian Friday 22)

There is a Birmingham Metal Festival. I am eyeing up Infernalfest (22 September) with cautious interest.

Jonathan Coulton on The Decline of Scarcity (via @onlystephan)

"We should have sent the poets" - as much Rio+20 analysis as I can stand to read out of work, courtesy of The Guardian.

Any And All records - Dada attempt to sign everyone so that there will be no more unsigned artists in the world. We like. 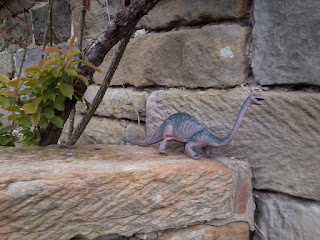 And .... rare sighting of Yorkshire Minisaurus in its natural moorland habitat
Posted by Magpie Moth at 9:01 AM No comments: